Investors are asking, “What does the current inversion in the yield curve mean?” The unsatisfying answer to this question is: Only time will tell. Since March 22 when the 10-Year Treasury yield fell below that of the 3-Month yield, there has been a flurry of stories about how an inversion in the yield curve is a precursor to recession. While it is technically true that an inversion has occurred before the last seven recessions, it can take a long time for the recession to appear and during that period the market can continue to rise. 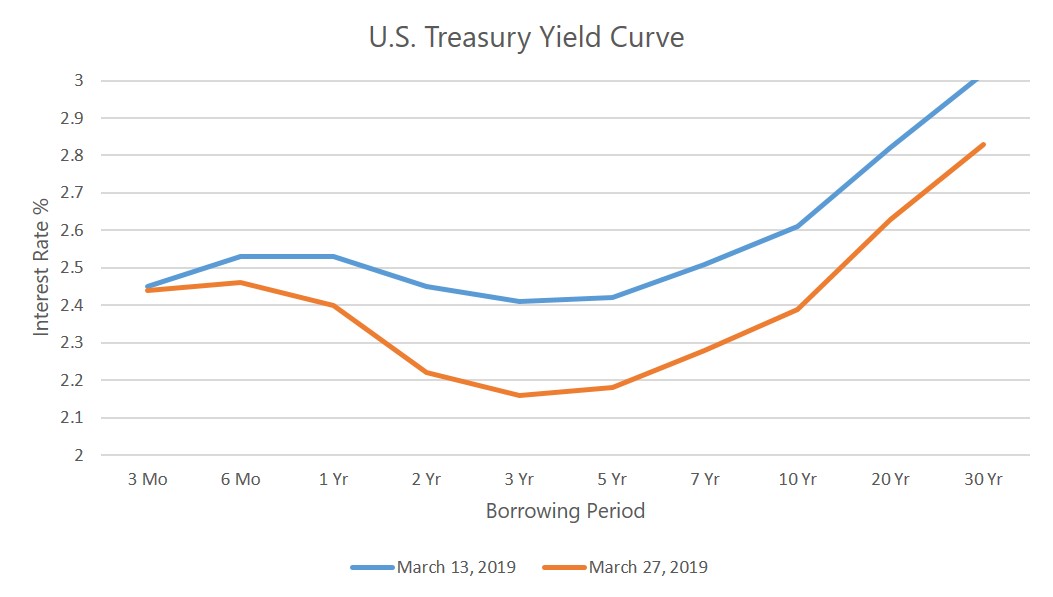 Looking at the chart above, we see that much of this downward pressure in yields has been in the “belly” of the curve. We have been talking about U.S. rates being contained partially because of their relative attractiveness versus the rest of the developed world, and this remains true. Only Italy has a 10-year yield slightly above the U.S.’s 2.6%. The 10-year yields in Japan and Germany are negative, and the United Kingdom’s yield hovers around 1%. Growth in the U.S. also looks better than most of the developed world, so perhaps things are not so bad at home. We have seen some weaker numbers in both consumer and business sentiment, but we must remind ourselves that both measures are coming off historic highs. Growth has slowed, yet it is still positive and company fundamentals look sound.
There are many things keeping investors nervous, but we feel the latest inversion flurry should not be one of them. If we see the long-end of the curve drop, or the 10-Year yield finally goes below the 2-Year, we will look for signs of potentially stormier times ahead.