Investment Insights
Back To All

Markets are moving forward and reacting favorably (as predicted) based on perceived election outcomes and progress on a COVID-19 vaccine. Our thesis has suggested that monetary policy, fiscal policy, control of the Senate and progress on the COVID-19 front were more important than who wins the presidential election. Markets reacted with some of the best post-election-trading weeks ever as the S&P 500 climbed 7.4% last week on outcomes that may have provided good news for both Democrats and Republicans and the economy overall. That winning trend continued Monday, November 9th, as progress on Pfizer’s vaccine lifted global equity markets significantly higher.

As of this writing (November 11, 2020), it appears that President-Elect Biden will become the 46th President of the United States unless legal challenges change that outcome (an unlikely scenario). Republicans appear to have gained several seats in the House of Representatives and are likely to retain control of the Senate. There are two Senate election run-offs on January 5th that will provide final resolution on that front. Nonetheless, markets are perceiving and responding favorably to the likelihood of a divided government.

We believe the likely impact to the economy due to the outcomes of recent elections are:

(Please read our recent market commentary, titled Mythology & The Permanence of Change, for a discussion of important dates relating to a contested election.)

While each party would argue that they are better for the economy, history shows that, on average, a divided government is good for the economy, jobs and the stock market. See exhibits 1, 2 and 3. Naturally, every period stands on its own and is driven by its own distinct and overarching policy climate. 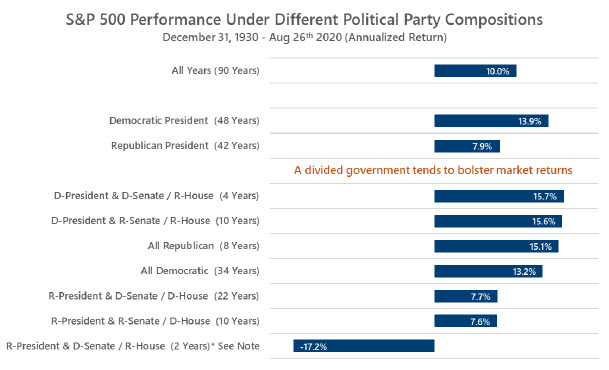 Source: Bloomberg, Past Performance is no guarantee of future results. As of 8/26/2020. Data is represented by the S&P 500 Index. The S&P 500 is considered generally representative of U.S. equity market performance. The United States has not had a Democratic President, Republican Senate and Democratic House since 1889 and therefore is out of the date range for this analysis.

Note: The 2000 election resulted in a 50–50 tie in the Senate, and the Constitution gives tie-breaking power to the vice president. The vice president was Democrat Al Gore from January 3, 2001 until the inauguration of Republican Richard Cheney on January 20. Then on May 24, Republican Senator Jim Jeffords of Vermont left the Republican Party to caucus with the Democrats as an independent, resulting in another shift of control. This period was treated as a Republican President, Democratic Senate and Republican House. 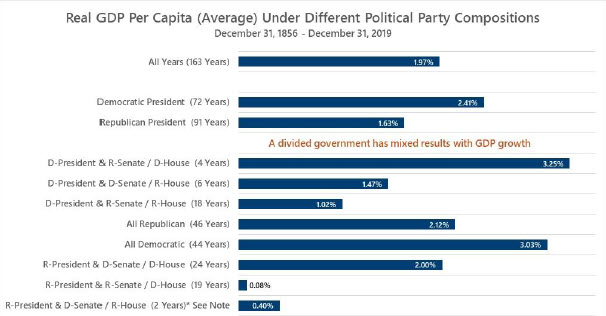 Note: The 2000 election resulted in a 50–50 tie in the Senate, and the Constitution gives tie-breaking power to the vice president. The vice president was Democrat Al Gore from January 3, 2001 until the inauguration of Republican Richard Cheney on January 20. Then on May 24, Republican Senator Jim Jeffords of Vermont left the Republican Party to caucus with the Democrats as an independent, resulting in another shift of control. This period was treated as a Republican President, Democratic Senate and Republican House.

Source: St. Louis Federal Reserve. Note: The category of Democratic President / Republican Senate / Democratic House is not present here because it hasn’t occurred since 1888, which is outside of the range for this analysis

*The 2000 election resulted in a 50–50 tie in the Senate, and the Constitution gives tie-breaking power to the vice president. The vice president was Democrat Al Gore from January 3, 2001 until the inauguration of Republican Richard Cheney on January 20. Then on May 24, Republican Senator Jim Jeffords of Vermont left the Republican Party to caucus with the Democrats as an independent, resulting in another shift of control. This period was treated as a Republican President, Democratic Senate and Republican House.

While we expect the economy to slow its torrid pace (33% GDP growth in third quarter 2020), upward momentum continues. October’s reading of the leading economic indicator of ISM PMI Manufacturing came in at 59.3 for October vs. expectations of 56.0 and the prior month’s reading of 55.4 (anything above 50 is considered expansionary). While we have only recovered half of the jobs lost due to COVID-19, the change in non-farm payrolls for October did increase and hourly earnings are up 4.5% on a year-over-year basis. Unemployment surprisingly slipped to 6.9%. Receiving less fanfare is worker productivity, which remains healthy with a 4.9% growth rate. Economic growth can increase through both higher employment and productivity.

Regardless of political outcomes, risk-assets (those with higher risk profiles), such as equities, are a favored asset class. With interest rates lower for longer, the cross-asset class relative valuations are compelling. Vaccine(s) and additional therapeutics provide left-tail downside risk protection. This has–and will likely–translate into a broadening of the economy and industry/company level performance. For example, growth stocks are likely to be joined by more cyclical growth (or value) sectors and companies. We have certainly witnessed this dramatic change on November 9th and 10th. Real assets that have exposure to tolls and other means of mobility should also be a beneficiary of these trends.

As we move forward, we are hopeful the next four years will bring an economic plan that supports job creation, the health of businesses of all sizes, and an appropriate level of regulation; in sum, making the U.S. a place where capital is treated well.

Amidst any continued uncertainty or fear that remains around our politics and the path of our COVID-19 recovery, we close on a poetic note; a quote about fear from the first two-time Nobel prize winner in Physics and Chemistry (and first woman to be awarded the prize), Marie Curie.

"Nothing in life is to be feared, it is only to be understood. Now is the time to understand more, so that we may fear less." - Marie Curie

The S&P 500 Index is a market-value weighted index and is widely regarded as the standard for measuring US stock market performance.

ISM Manufacturing Index measures manufacturing activity based on a monthly survey, conducted by Institute for Supply Management (ISM), of purchasing managers at more than 300 manufacturing firms

Please remember that past performance may not be indicative of future results. Opinions, estimates, forecasts, and statements of financial market trends that are based on current market conditions constitute our judgment and are subject to change without notice. This material is not intended as an offer or solicitation for the purchase or sale of any financial instrument. References to specific securities, asset classes and financial markets are for illustrative purposes only and are not intended to be, and should not be interpreted as, recommendations. The information contained therein is based on internal research derived from various sources and does not purport to be statements of all material facts relating to the information mentioned, and while not guaranteed as to the accuracy or completeness, has been obtained from sources we believe to be reliable. Different types of investments involve varying degrees of risk, and there can be no assurance that the future performance of any specific investment, investment strategy, or product (including the investments and/or investment strategies recommended or undertaken by Calamos Wealth Management LLC), or any non-investment related content, made reference to directly or indirectly in this newsletter will be profitable, equal any corresponding indicated historical performance level(s), be suitable for your portfolio or individual situation, or prove successful.