Behind the Numbers – "Still Standing Tall"

Our thoughts are with all those impacted by Hurricanes Irma and Harvey. Lives are disrupted and heavy damage inflicted, but time and again, we see our country take a hit and get back on its feet. We believe this resilience will shine through once again.

The U.S. equity market has weathered its own share of challenges this summer – from a stream of high-level staff changes at the White House, to rising doubts that the President’s “pro-growth” agenda will be enacted, to concerns over the unwinding of extreme monetary accommodation both here and in Europe. Add to that the intensifying tensions with North Korea, and one may have thought the “sell in May and go away” crowd could be the winners this year.

But despite the clouds that gathered, U.S. equities are still standing tall. Recent events have again reminded us that structures built on sturdy foundations can withstand turbulent conditions. And upon closer inspection, the U.S. stock market does have solid underpinnings.

While the U.S. economy has not yet shifted into high gear, the economic backdrop remains steady. Few signs of recession are on the horizon, as real GDP growth came in at 3.0% in the second quarter. The unemployment rate is down to 4.4%, and the latest manufacturing and retail sales figures paint a positive picture. It is also encouraging to see consumer sentiment and small business optimism near their post-election highs. 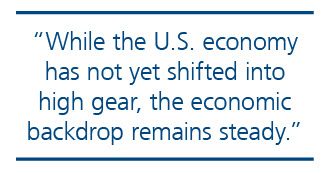 There has also been moderate economic progress overseas. For the first time since 2007, all 45 countries tracked by the Organisation for Economic Co-operation and Development (OECD) are forecast to have positive GDP growth this year. After a decade of uneven expansion in Europe and emerging markets, this period of “synchronized global expansion” is a welcomed reprieve.

A sound economic backdrop is important for equities, but only when it is accompanied by strong corporate earnings growth. After several quarters of declines, U.S. profits have rebounded in 2017. A partial recovery in oil prices has contributed to this, but the uptick in earnings is widespread across sectors. The consensus on Wall Street is for this trend to continue, and we tend to agree.

Throughout the recovery, firms have done a stellar job controlling expenses, and profit margins have soared. Just how much further earnings can grow from here hinges on Corporate America’s ability to contain its cost structures. If wage growth remains relatively benign (despite low unemployment) and borrowing costs stay favorable, these high margins could be sustained. The surprising retreat of the U.S. dollar should also help boost earnings for multinational firms.

A “wild card” is a potential cut to the corporate tax rate, which remains on the table. Even if the rate only comes down from 35% to 25%, firms would see a sizable boost to their bottom lines. Sensing the need for a victory, the President has redoubled his efforts to get this done.

All this is not to imply smooth sailing ahead. Geopolitical tensions can ratchet higher, the dollar could reverse course, or the Fed could jolt the markets with new details on monetary policy normalization. And, lest we forget, valuations are somewhat rich on a price-to-earnings basis.

Nevertheless, the elevated prices for U.S. equities seem justified, given the solid backdrop both here and abroad. We are not anticipating another substantial surge higher from here, but current conditions could support further modest gains for the U.S. stock market.

As previously mentioned, the OECD forecasts that all 45 countries it tracks will have positive GDP growth this year. It has been a decade since all the nations were growing in unison. In addition, 33 countries are on pace to have accelerating growth in 2017 relative to the prior year. 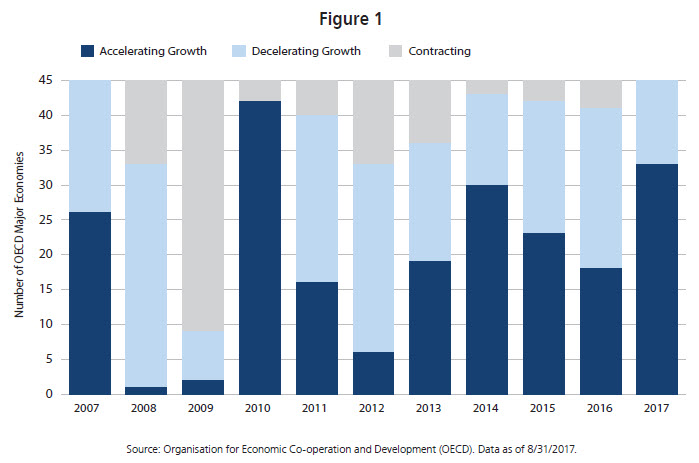 The U.S. Manufacturing PMI (purchasing managers’ index) reading rebounded to 58.8 for August, its highest level since 2011. Last month’s PMI for most major economies was at or near its two-year high. Figures above 50 suggest expansionary activity, while those below 50 indicate contraction. This is further confirmation that major economies appear to be expanding. 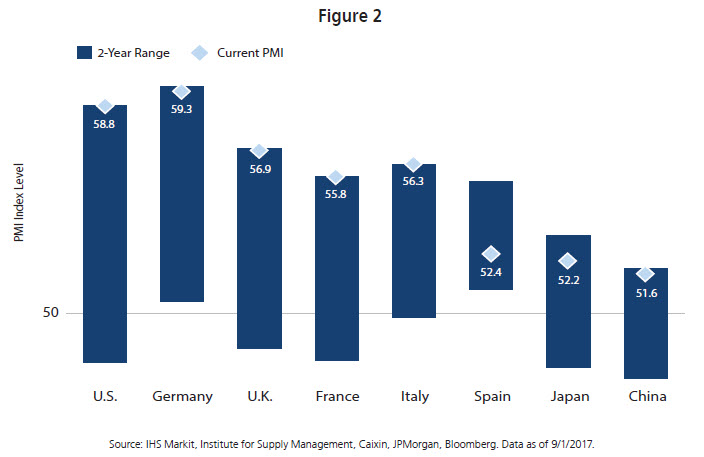 U.S. Real GDP rebounded to an annualized quarter-over-quarter growth rate of 3.0% during the second quarter of 2017, after growing a muted 1.2% to open the year. 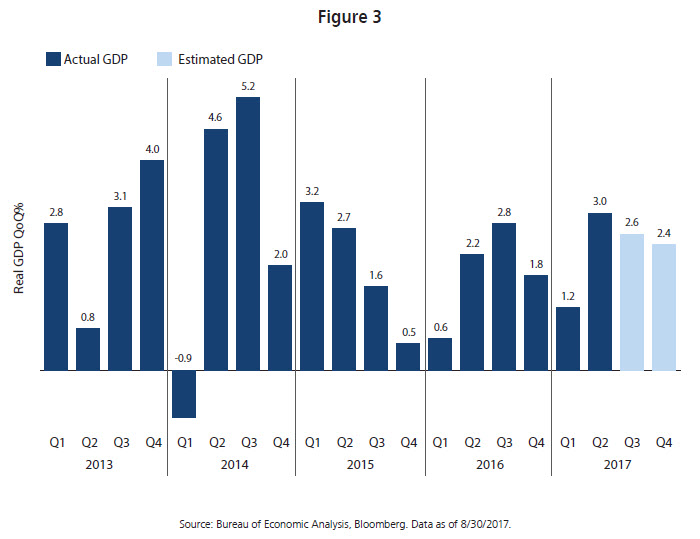 S&P 500 earnings per share (EPS) for the second quarter of 2017 grew 10.6% versus the prior year, led by the Energy and Information Technology sectors. Ten of the eleven sectors in the index had positive EPS growth for the quarter, while Consumer Discretionary stocks had flat year-over-year EPS, in aggregate. 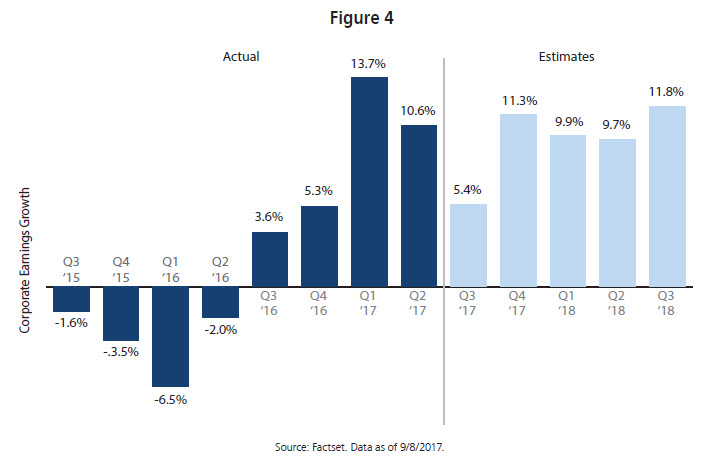 The U.S. Dollar Index has weakened considerably to 91.9 from a high of 103.2 in early January. Coming into the year, few anticipated such a move, as the consensus view was that the greenback would remain strong relative to other currencies. A weaker U.S. dollar typically favors U.S. corporate earnings. 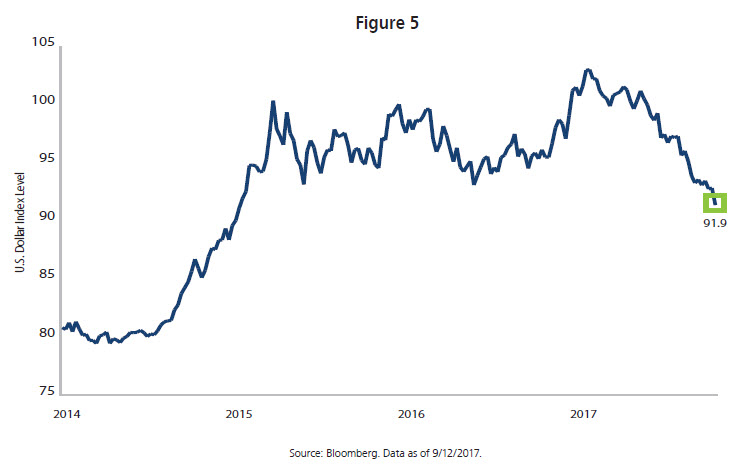