Founder's Corner
Back To All

From the Desk of John P. Calamos, Sr. - Founder, Chairman and Global CIO

I began my investing career in the 1970s, and I’ve had the opportunity to manage assets through up, down and sideways-moving markets. Short-term uncertainties are always par for the course, whether its political unknowns and elections, geopolitical conflicts, or concerns about stock prices and interest rates. Risk-aware and experienced investors always pay attention to these crosscurrents—our investment teams certainly do. Overall, however, when I consider the current climate, I see many reasons to be optimistic about the road ahead.

1. The global economy is positioned for continued expansion. The risk of imminent recession is low in the U.S. and other major economies (Figure 1). We believe the U.S. economy is mature but not in an end-of-cycle phase, and other economies are in earlier stages of their growth cycles. 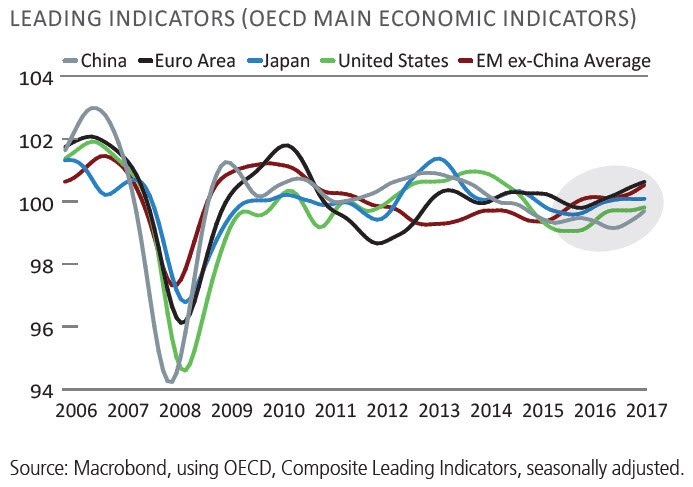 2. U.S. fiscal policy provides a tailwind to earnings and economic growth. As I’ve noted in the past, fiscal policy can be a powerful catalyst for economic expansion. A lower corporate tax rate helps level the playing field for U.S. corporations, while corporate management teams have welcomed a reduced emphasis on new regulations (Figure 2). 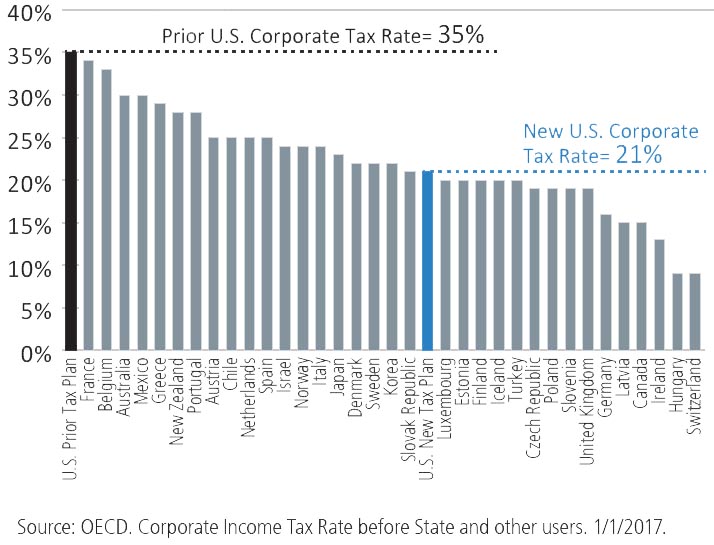 3. Small business owners are upbeat. Survey data from the small business sector has surged over recent months. I view this as an important positive because small businesses are a key engine of job growth (Figure 3), and in turn, economic expansion.

Figure 3. Small Businesses Account For More Than Half of U.S. Private Sector Jobs 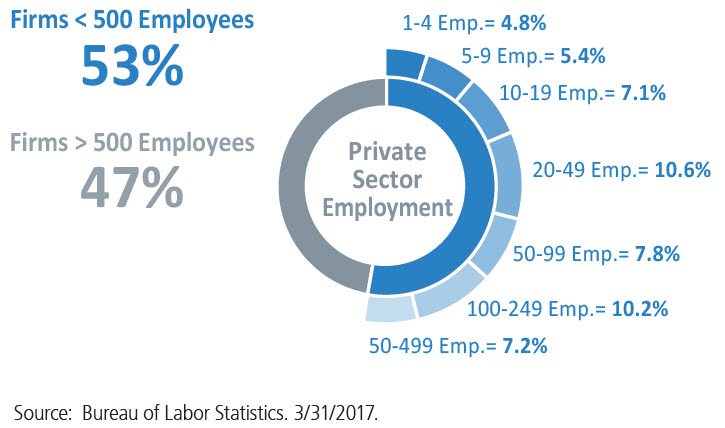 4. Consumers are in good shape. Against the backdrop of a healthy economy, unemployment has continued to drop to slightly above 4% at the end of 2017, down from nearly 8% at the end of 2012. Also, consumers have done a good job lowering their debt, so household balance sheets are sound (Figure 4). 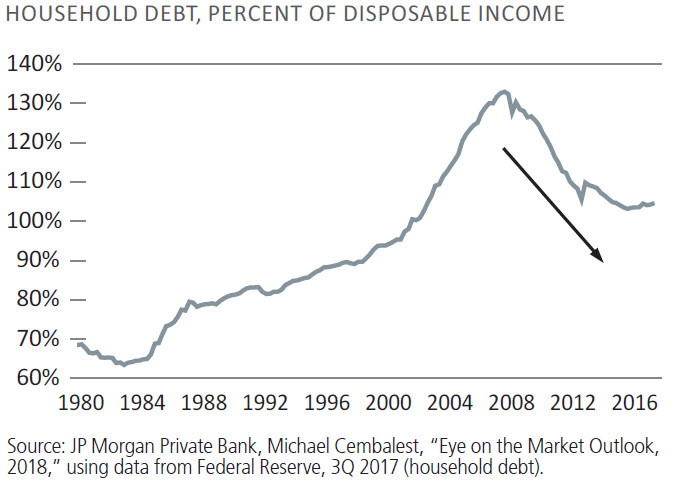 5. Inflation is not a near-term worry. Of course, a rapid rise in inflation—such as what I saw in the 1970s—would be a game changer. But data doesn’t point in that direction. Inflation remains well below the Fed target (Figure 5). Also, in today’s economy, technology advances and productivity gains serve to offset inflationary forces.

Moreover, I believe a modest rise in inflation should be viewed as the sign of a healthy economy not a symptom of an unhealthy one. As the U.S. economy continues to grow, the Fed is likely to step in and raise short-term interest rates. If steady economic growth is the reason why the Fed raises rates gradually and inflation rises to modest levels, that’s really not a bad thing. Historically, stocks have tended to perform well during periods of normal inflation. Additionally, long-term rates are likely to remain well-contained in a global low rate environment.

Figure 5. Inflation is Below Long-Term Target 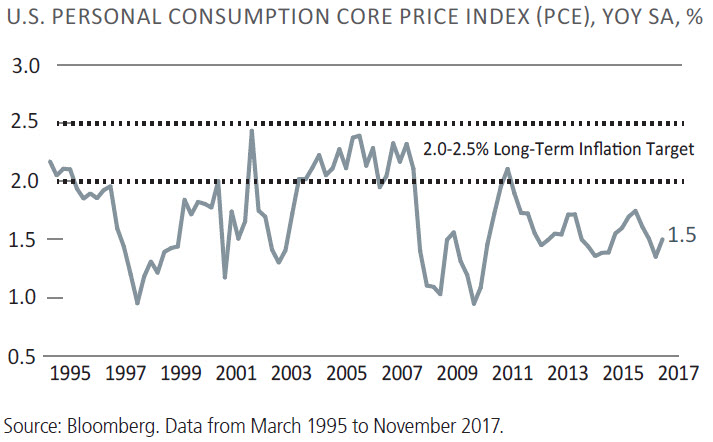 6. The flipside of volatility is opportunity. It may come as a surprise that I would include volatility as a positive. But for long-term active managers who follow a disciplined approach as we do at Calamos, short-term stock market volatility—even a correction—can provide buying opportunities in an environment of economic expansion. Our teams pay close attention to company fundamentals and research multiple angles of a company to ensure that we’re being appropriately compensated for the risk we are taking. When market volatility increases, our teams seek out ways to build positions in attractive opportunities at low prices.

There are many reasons to have a positive outlook for 2018 and beyond. The dramatic turn in U.S. fiscal policy and global economic trends are strong tailwinds for the economy and markets. However, even though my long-term view is positive, I’d like to close with a reminder that corrections are typical—including in bull markets. Throughout the years, I’ve had countless conversations with people who have regretted trying to “time” the market—selling during the short-term downturns only to miss the upturns. A long-term focus isn’t always easy, but it can make a big difference in achieving your long-term financial goals.